Tim Buchanan and Brian Warren have a long history in Wichita in
a once relatively new field, assisted living. “We competed in a lot of
different markets,” Warren said.

Over the next couple of decades both men continued growing in the
business, although Buchanan focused more on retirement, assisted
living and memory care and Warren with skilled nursing and assisted
living concepts.

Now, Buchanan’s Legend Senior Living and Warren’s Foundation
Properties are joining forces on a new concept, called Regent Park. It
will open off 13th Street between Webb and Greenwich in March 2012.
It is meant as a continuation of care to Legend’s Regent Retirement
Community and offers assisted living, memory care and skilled nursing.
“There is a strong need for a continuum of care so the residents can
move seamlessly from one level to another,” Warren said.

Buchanan noted that sometimes there is a couple where one spouse
may need skilled care for a time and Regent Park is perfect for that.

Warren said that Foundation Properties rehabilitates 75 percent of its
admitted patients back home. The goal is to have residents obtain the
optimal level of self care and independence.

“Forget everything you know about a nursing home,” Warren said,
“because we did and designed an entirely new concept of skilled care.”

For example, at Regent Park Health Care and Rehab there will be two
core neighborhoods for residents with a bistro, laundry, wellness desk,
living room and a private dining room. The goal is a more intimate feel.

In the skilled nursing section, every resident will have a private care
suite, with Wi-Fi, digital TV and private bathroom. Residents can order
off the menu with 24-hour room service if they choose or enjoy dining
with friends in the dining room – gone is the cafeteria style of other
nursing homes.

“We call it elegant care,” Warren said. “It’s on the resident’s terms,
their choice. … Twenty-five years ago, the only choice the resident
had in a skilled-nursing home was whether they wanted the bed by the
window or the door. We’ve come a long way.”

In 1980, a 100-year-old resident was an anomaly. “Today,” Warren
said, “it’s not unusual to have a 75-year-old who is on Facebook and
wouldn’t dream of not being able to check in with the grandchildren
online.”

“The rehab center will be especially impressive,” Buchanan said. It will
be set up with a mock brownstone apartment with training steps, a full
kitchen and bathroom and a full-size car so residents can practice all
the aspects of daily living they will need for independence again.

“The reality is that many people stay at home too long,” Buchanan
said, “Not benefiting from a supportive social environment that
research says leads to a more independent life.”

Buchanan started out in residential design and development. He
ended up finding his way to assisted living after doing mission trips
in Haiti and looking for an opportunity to have a greater impact in
changing people’s lives.

“It was night and day the type of difference we could make in people’s
lives in long-term care,” Buchanan said. Buchanan and Warren
both love Wichita and raised their families here. Although technically
competitors in the field of long-term care, they have had decades to
develop mutual respect. “We keep pushing the envelope, leveraging
our 25 years as long term care owners.” Warren said. 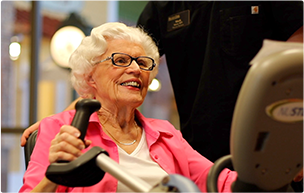